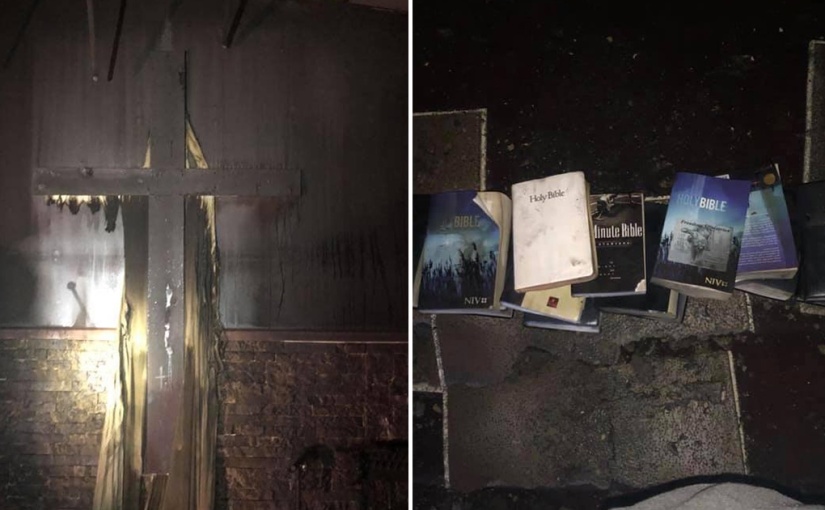 God Gold of the Day

Below you will see a video about the news of a recent fire that broke out at a church in West Virginia. The reason this news is getting an extreme amount of publicity, it’s not the church building that was destroyed or the fire itself, but it’s what remained throughout the scorching hot flames of the fire.

At the end of the fire, firefighters stood in amazement. As they said, there was times the flames were so hot that they had to halt from going in the building, but what they found that remained untouched and unharmed, the Bibles that the church had there and the cross that hung in the church! That makes zero sense right?!? How could these two things be unharmed but the church itself be destroyed? The Bibles are made of paper and the cross is made of wood, I’m no fire expert but don’t those two things burn more easily than most?

The conclusion of this can’t be explained by any kind of science or man-made reason. The over-arching theme of this wild event was spoken by the pastor at this church as he responded to the reporter upon hearing of the unharmed Bibles; ““In the midst of the fire, God’s word will always stand.”

How powerful and true is this statement made here by this pastor! It’s something as Christians we claim to believe but LOOK!!!! Look at what happened here, this statement is more true than we could ever imagine!!! There is no fire or nothing that can stand against or harm the Word of God or the truth that resides in it being the Good News of Jesus where by His sacrifice on the cross, a way was made for us when there was no way!

Wow God!!!! He never ceases to amaze us and I hope this awesome event that only God could be in control of strengthens your faith and opens you up to walking deeper into these two things that can’t be harmed or touched in our lives; the Word of God and the Cross of Jesus Christ!

What blew my mind even more from this wild news was that the church building burnt down but these two things remained. It really convicted me, as I live in the Bible belt of the deep south and in a country like America where so much emphasis and focus is put on facilities, the size of church buildings, the styles, and so forth. This event opened me up to see a lot of truth in the fact that yes, church buildings and facilities are great to be used for God’s purposes in reaching others with His truth. But at the end of the day, I hate to think that at times we can get so caught up in our church building and the beauty of it that we lose focus on the only things that really matter, and that is the Word of God and the cross of Jesus!!! I can’t imagine the revival that would occur if the focus becomes shifted to see what God says is the main thing and keeping it the main thing! Just something to think about because as we see here this church building was destroyed just like any other could be, but the only things that matter to God and that should matter to us were kept unharmed and untouched even in the most impossible odds! I hate this news for this church family but I am 100% positive they will be alright because they still have all that God has shown us that we need, His Word and the Gospel of Jesus!

24 year old dude with not a clue what he's doing but God's grace continues to amaze me! Current Seminary student, avid adventure seeker, and getting married to the most humble, weird, and beautiful girl on the planet! Wasted a lot of years living what I thought was the "good life", then Christ showed me what living really is. I pray that my story can somehow help in whatever way possible, to give encouragement and hope that Christ can do the same with you. View all posts by GodGoldofTheDay