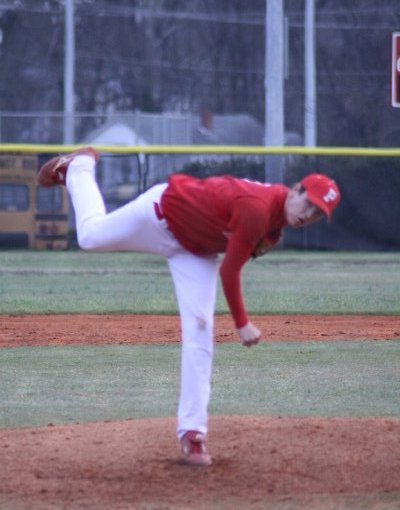 God Gold of the Day

“Therefore, since we are surrounded by such a huge crowd of witnesses to the life of faith, let us strip off every weight that slows us down, especially the sin that so easily trips us up. And let us run with endurance the race God has set before us.” –Hebrews 12:1

I overheard my dad telling an old baseball story from when I was younger today and I thought I had heard them all since I was living them but I must have missed this one. This story isn’t meant to relive the glory days with you or any of that, just noticed something pretty awesome that goes right along with our lives and God’s Word.

Growing up, I had hit my growth spurt early on so I was always one of the bigger kids in my age class. When my size came to baseball, it helped me out a ton. When I was younger I could throw pretty darn hard from the shorter mounds so when the other team would see me coming to the mound to pitch, they were terrified. In those early days I threw hard enough to back it up because that’s what you expect from an overgrown man child of a twelve year old right? Well getting a little older, I kept getting taller but the taller I got, I lost a lot of my power. So my dad was relating to a game when I was around 14-15 years old, I had taken the mound to pitch and we were playing at East Cobb which is one of the big time baseball complexes in the South that a lot of major league talent has came from. I say all that to say that the teams we played there were no joke and the team we played that day was no different.

At this point in my pitching career I wasn’t the same fire-baller that I used to be, I pitched with control, being accurate with each pitch is where my bread was buttered. My dad had been sitting behind the plate that game and there was a couple more dads from the other team sitting beside him. They saw me walking to the mound, the big ole lanky kid who looked like he could throw gas. Then I started warming up….no gas! I threw pretty slow at this point compared to other top-notch pitchers and when these dads from the other team saw how fast I threw, they started saying, “Geez! We’re going to light this guy up!” They were excited because they thought since I threw slow that their team would destroy me with hits. I’m sure my dad wanted to say something but I just began pitching, hitting my spots, throwing with accuracy and using my long arm to deliver a pretty weird angle for the batter to see where it was coming. I must have been having a really good day because I pitched a no-hitter into the sixth inning before they finally started getting hits off of me. I had no idea these dads said that, even until today but I just went out there and pitched and you can say things went a little different than they had expected.

My dad was saying with each inning, the guys got quieter and quieter, and he also said he really wanted to say something after I had proved them wrong but he just laughed. I don’t tell you that to say look at how good I used to be at baseball. That was just one good day out of a lot of bad. I heard that and thought if I would have heard those guys, how would I have handled it? I want to say I would of been even more fired up to pitch my best to show them what’s up but honestly knowing that would have probably messed me up from just going out there and pitching with not a care in the world.

I also asked myself, how would I have handled that kind of criticism today? How do I handle the criticism that I do face today? Even if it’s not direct verbal criticism, maybe it’s someone constantly expressing doubt in you, maybe it’s being around negative voices, complainers, excuse makers. When we go into the race of life, all this surrounding noise can be a huge weight to carry on our shoulders. With other’s doubts in you, that can cause doubt in yourself and really hurt how you pitch, or handle daily life. With others speaking negative, excuses or complaining all the time around you, that too can rub off on you so easily and you may start developing those same habits in the way you pitch or run this race. The Lord says in Hebrews 1, “we are surrounded by such a huge cloud of witnesses.” Every where we go, everything we do we are surrounded by witnesses. Maybe they are negative voices in your life but at the end of the day they are “witnesses” so they witness every move you make, every pitch you throw and how you handle things in your life.

It’s easy to say, “those things don’t affect me, they aren’t weighing me down.” But the truth is do they really not affect you? Sometimes we can be blinded to the weight that holds us down, to how much it holds us down. I encourage you to take some evaluation in this area and give yourself a spiritual check-up to make sure you aren’t carrying weight that you don’t have to carry.

I can almost guarantee the two possible reactions I would have had on the pitcher’s mound that day if I would have heard those dads. And these reactions go right into how we react to other’s voices today. I would have gotten fired up and tried to throw harder, prove those guys wrong. In the process of that I probably wouldn’t have pitched nearly as good as I did. Throwing hard wasn’t my game so trying to be someone I’m not to prove someone else’s opinion wrong would have been just dumb. Or I would have been filled with doubt, worry and insecure about how good of a pitcher I was. I would have pitched scared and probably never had made it out of the first inning. You see how easily voices in our lives can weigh us down and make us handle life and pitch differently than the Lord has called us to pitch?

The Lord says clearly hear on how to live in front of all these people watching us. Throw off the weight of their voices, criticism, doubt, negative, so you can run with endurance in this race of life God has set before us. With that weight holding us down, we are held back from running this race the way God has intended and we’re missing out on the freedom that He’s given us to just run, weightless, not trying to be anyone we’re not but just being who God made us to be. Not reacting out of strife, trying to prove people wrong but going to the mound, muting the voices, just you and God playing the game of life how He has called us to play it. What’s really cool to think about is like today I was thinking, “man, I really proved those guys wrong.” The only reason I was able to was because I didn’t hear their opinions. Whether you hear them or not, mute them, put them to the side, you don’t need to carry that weight and you don’t have to. Just pitch, keep throwing pitches the way God has shown you how to throw them and those people in your life will be impacted greatly. Maybe their doubt, negative talk, the excuses or complaining they do, maybe that affects them in a huge way seeing you run weightless through this life. Maybe that changes their negative to positive, their complaining to thankfulness, or their excuses to hope?? Think about that? This race of life God has given us to run is so much bigger than me and you! Put aside all that weighs you down and just keep pitching!!!! You may not see the impact in the moment, or in my case in this story, you may not even know who you’re impacting by your attitude to run freely with endurance with God. Just keep pitching!!!! God is using you and is going to use you in amazing ways before others so keep pitching!!!! You may not see it now but it’ll be worth it when we hear our heavenly Father telling “old baseball stories” about us one day!!!

24 year old dude with not a clue what he's doing but God's grace continues to amaze me! Current Seminary student, avid adventure seeker, and getting married to the most humble, weird, and beautiful girl on the planet! Wasted a lot of years living what I thought was the "good life", then Christ showed me what living really is. I pray that my story can somehow help in whatever way possible, to give encouragement and hope that Christ can do the same with you. View all posts by GodGoldofTheDay